Short-term visitor arrivals from China tripled in past 10 years 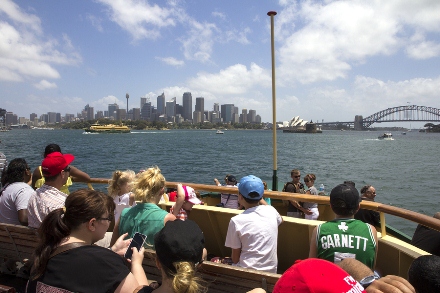 New South Wales remained the most popular destination for overseas visitors in 2013-14.

Chinese residents made a record number of visits to Australia in the 2013-14 financial year, according to the Australian Bureau of Statistics (ABS).

Assistant Director of Demography, Neil Scott said: "Arrivals from China have more than tripled over the past ten years, making it the second most popular source country for visitors to Australia.

"Short-term arrivals from Asia make up approximately the same percentage of total arrivals in 2013-14 that they did in 2003-04. However, there have been large changes in the number of arrivals from particular Asian countries.

"New Zealand remained the top source for overseas short-term visitor arrivals, with 1.2 million trips from across the Tasman in the last financial year. China is followed by the United Kingdom (647,000), the USA (529,000) and Singapore (367,000).

"These top 5 countries made up more than half of the total number of short-term visits in 2013-14.

"New South Wales remained the most popular destination for overseas visitors in 2013-14, claiming nearly 40 per cent of all short-term trips. It was followed by Victoria (23 per cent) and Queensland (23 per cent).

"The most frequently cited reason for journey was for a holiday, making up nearly half of all journeys, and the median amount of time people spent in Australia was 11 days."

Further information is available for free from the ABS website in Overseas Arrivals and Departures, June 2014 (cat. no. 3401.0).