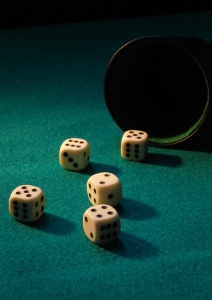 Sydney is accustomed to overshadowing the rest of Australia when it comes to grabbing national attention with grand plans.

So when billionaire James Packer's $1 billion vision for a six-star resort and casino on Sydney Harbour dominated the headlines this week, Echo Entertainment's idea for a second casino in Brisbane was lost in the news cycle.

When it comes to getting noticed, however, Packer's Crown group has it all over Echo.

Crown's bid to build a casino for high rollers at Sydney's Barangaroo site has the potential to destroy the fortunes of Echo's flagship casino The Star, whose exclusivity licence expires in November 2019.

Echo chairman John O'Neill spent much of Thursday's annual general meeting on the Gold Coast reassuring shareholders he wasn't worried about a threat to The Star.

"We're not going to spend a lot of time worrying about what may happen in 2019," he said.

While The Star is performing well following its $1 billion revamp, Echo's Queensland casinos are struggling from a soft consumer environment.

O'Neill confirmed the company wanted to spend $1.3 billion in Brisbane and on the Gold Coast.

But that money would be better spent on an all-new casino in central Brisbane rather than on upgrading its existing Treasury casino by the river.

"In terms of the existing buildings in Brisbane they offer not a lot of prospect for growth in our business," he said, adding the Treasury building could be converted into boutique hotels and restaurants if a second casino was allowed.

He was coy about whom he spoke to.

"I fronted the meeting, yes. I'm not going into the attendance register," he said.

"The premier has not met with Echo, but I understand the deputy premier has," a spokeswoman said in an email.

Echo's government relations fortunes in Queensland are at least much sunnier than in NSW, where Premier Barry O'Farrell declined in September 2011 to attend a lavish re-launch party for The Star.

Queensland's Liberal National Party is giving Echo some attention as it seeks to maintain its monopoly casino position in Brisbane.

This comes less than a month after Singapore's Sembawang Corporation blacklisted Newman, accusing the Queensland premier of favouring Echo after he declined to discuss a casino development proposal for the Gold Coast.

Getting attention from the right people is what the casino game hinges on.