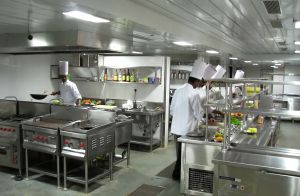 US and Australian chefs are urging international campaigners gathered in Italy to join a revolution in the way children eat.

As the world struggles with a growing obesity epidemic, 'slow food' gurus from the US and Australia are urging international campaigners gathered in Italy to join a revolution in the way children eat.

"Australia has exactly the same problem as almost any other developed country: a very large obesity rate. Something must be done globally," Melbourne chef Stephanie Alexander said at the world's largest food fair in Turin.

Alexander, who set up the not-for-profit Kitchen Garden Foundation in 2004 to tackle poor eating habits, has come to talk to activists from India, Africa and Brazil about her project.

While the US, Mexico, New Zealand and Australia are the four most obese countries in the world, more people are being affected across the globe.

"It's all about education – teaching children the difference between good and bad food," said Alexander.

Her program, currently active in 265 schools, gets children aged eight to 11 involved in growing seasonal food in school allotments then preparing it in special training kitchens and sharing it with their classmates at lunchtime.

It has been such a hit that the Australian government has invested $A20 million in the project, which currently influences about 30,000 children, a number set to double soon.

Alexander is in Turin with US chef Alice Waters, founder of Berkeley's famed Chez Panisse restaurant and vice-president of the Slow Food movement, which was founded in Italy in 1986.

Waters is best known as the woman who inspired US first lady Michelle Obama to open a kitchen garden at the White House, but has also dedicated much of her time to the Edible Schoolyard project, which she founded in California in 1995.

"I'm terribly worried about the indoctrination of fast food around the world and the culture that comes with it," Walters said.

One of the projects inspired by Waters is the Edible Sac High garden and kitchen in a school in Sacramento.

"One thing we know is that when kids cook food and grow it, they all want to eat it," she said.

For Waters, the Turin gathering is an invaluable chance to spread the word about fresh food and draw inspiration from Italian culture.

"The Italians have a very deep-seated food culture," she said.

"Many, many people still have backyard gardens ... and still have the idea of eating together as a family.

"This fair not only reaffirms those ideas but it is also a way to spread the good news, and in the face of obesity that's what we need: hopeful, good news."