Café owners use crowdfunding to bring refugee dream to reality 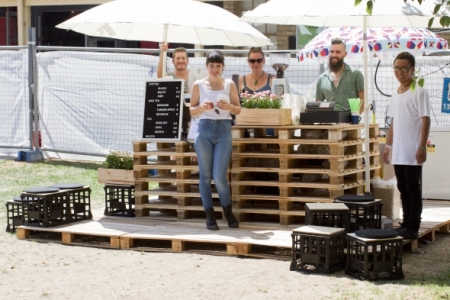 The café was first launched as a pop-up at popular music festival St Jerome's Laneway in 2014.

A Melbourne-based café has turned to an unlikely source to build a business that provides employment opportunities for refugees.

Jane and Francois Marx, owners of Victoria's Long Street Café have turned to crowdfunding to make their idea a reality, driven by a passion for refugee rights.

First launched as a pop-up café at popular music festival St Jerome's Laneway in 2014, the couple hired two refugees to work with them on the stand. It proved to be an enormous success, and the Marxs were called on to run it again at the Melbourne Festival of Live Art.

Continued success at this event spurred them to seek a permanent location, which was recently secured in the suburb of Richmond. Their goal towards the end of 2014 was to raise sufficient funds for a fully functioning café-training centre for young refugees.

A crowdfunding campaign run on Pozible has so far brought in over $18,500.

The couple said young people from refugee backgrounds are seldom given opportunities to work, despite their eagerness.

"Working in hospitality, we've seen numerous young people from refugee backgrounds walk in to cafes looking for work, only for their resume to end up in the bin," they say on their Pozible page.

"Little to no Australian work experience, less-than-perfect English language skills, and often a lack of self-confidence, are usually the reasons for this.

"As everyone can understand, it's very difficult to feel a sense of belonging, to make friends, and to be self-sufficient when you don't have a job.

"Our dream is that Long Street will come to play an important role in building a more progressive and inclusive Australia, a place where asylum seekers and refugees feel welcome.

"We think that when the person making your coffee just so happens to be a refugee, it might make it a little bit harder for people to believe the negative stereotypes of so-called 'boat people'.

"We know that there are many people out there who also believe that we need to do more to give refugee and asylum seekers a fair go."

As of 24 December 2014, the couple's funding target has been reached.