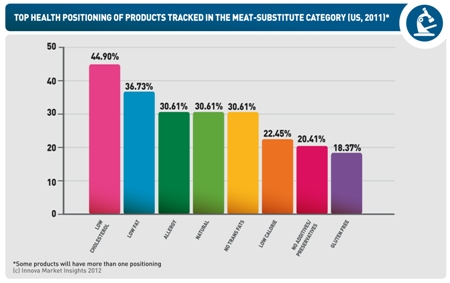 With over seven billion mouths to feed globally, the demand for protein continues to rise.

With over seven billion mouths to feed globally, the demand for protein continues to rise.

Hardly surprising then, that the hunt for protein alternatives is gathering pace. Intellectual property development and patent activity is on the rise, according to new data to be presented by Innova Market Insights at this year's IFT Food Expo in Las Vegas (June 26-28, 2012).

The market researcher found the US accounted for over 40 per cent of recent alternative protein patent activity.

The race to find alternative protein solutions is well underway. Traditional areas like soy, wheat, lupin and chickpeas are being examined again as healthy and sustainable solutions. While soy continues to dominate in terms of vegetable proteins, a range of new products is starting to appear, based on other beans, as well as nuts, seeds, grains and vegetables.

New techniques are also being developed to enhance the texture, juiciness and flavor of meat analogs and proteins.

Consumers are changing too, perhaps in an attempt to be part of a sustainable future.

"We see the emergence of a flexible vegetarian or 'flexetarian'," says Lu Ann Williams, director of innovation at Innova Market Insights.

"These consumers enjoy meat, but occasionally opt out due to their concerns about health and the environmental impact of heavy meat consumption."

New US launch examples include Bolthouse Farms' addition of a blended coffee variant to its Protein Plus range of all-natural shakes.

Other recent US activity has included an extension of the Atkins Advantage low carb meal replacement bar range with chocolate orange and chocolate brownie variants.

Balance Bar has introduced a cookie dough variant to its original sub-range. All featured soy protein as the key protein ingredient, although the products tend to be marketed on a more general health and everyday performance positioning.

Proteins, such as soy, are also being marketed on a health platform, functioning as part of the solution to tackle the obesity epidemic.

Innova Market Insights reports that over one-third of the tracked launches marketed on an "added protein" platform in the 12-month period to the end of March 2012 contained soy.