Large and small businesses alike strive for maximum exposure from their marketing efforts, and hospitality marketing in particular requires creativity to attract notoriously fickle customers always looking for the 'next big thing'.

However, one crazy or insightful idea can also grab the attention of local or even national media, offering exposure most independent operations could never afford.

Advertising is typically an expense line for hotels, but a necessity to attract customers.

The five-star Pestana Rio Atlantica in Rio de Janeiro decided to tip this practice on its head. They found a way to sell advertising while filling rooms and booking events.

The only pesky part was giving up their name for a few weeks.

Done as part of the 2014 FIFA World Cup, a major beer brand took over the aesthetics of the hotel — right down to a temporary re-branding as the Budweiser Hotel by Pestana.

Aside from a plethora of Budweiser banners, the campaign included marquee events at the hotel throughout the two-week event.

The Bull & Bear Steakhouse in New York's Waldorf Astoria has a particular market niche. They tend to cater to stockbrokers and investors, and came up with a unique way to help patrons through some tough financial times.

Beverages at the bar were discounted based on the day's performance of Facebook stock.

A one per cent drop in the market meant a $1 drop in the price of a cocktail. If Facebook dropped by 2.5 per cent? That meant $2.50 off an Old Waldorf Fashioned or other cocktail, up to a maximum discount of $5.

This was a shrewd marketing plan that also appealed to a new, younger audience. However, patrons seemed less interested in paying more for their drinks after a good day.

3. Going viral with a yoga mat

Some of the best advertising is free advertising. YouTube and other services are full of viral videos that are thinly-veiled marketing efforts.

One of our favorite hospitality examples is offered by Kimpton Hotels and Restaurants. For your viewing pleasure, we offer Mat and a yoga love story.

Productions costs for a video can be managed to fit any budget. Larger companies can hire professional writers and a production crew, but the right idea and a good cell phone camera can garner every bit the attention.

The key is for it to be catchy and fun; a marketing plan to kick-start the video's popularity is also important.

The popular Seattle, Washington restaurant came up with a brilliant marketing campaign to grab the attention of potential waterfront patrons.

A documentary-style search for underwater billboards, allegedly sunk in 1955 to reach potential submarine traffic, was rolled out on YouTube and the company's website.

The elaborate hoax/marketing campaign was very much in the spirit of the late restaurateur, Ivar Haglund. His penchant for self-promotion made him a local celebrity and this campaign tapped into the goodwill inspired by his name and likeness.

The results were impressive. The elaborate marketing campaign carried a $250,000 budget, but customer counts in their restaurants increased by 10 per cent in a difficult economic climate.

Sometimes large budgets and meticulous planning are trumped by timeliness and quick action.

Peter Shankman, a loyal customer of Morton's — not to mention the CEO of Geek Factory, blogger for Huffington Post and an influential Twitter follow — sent out a jovial Tweet asking Morton's to deliver a porterhouse when he landed at Newark airport after a long day of travel.

To his astonishment, he was welcomed by a tuxedo-clad waiter with a white Morton's bag containing the porterhouse, shrimp and fixings.

"I. Was. Floored," Shankman shared in his blog.

"As I say in my book over and over again, customer service is no longer about telling people how great you are. It's about producing amazing moments in time, and letting those moments become the focal point of how amazing you are, told not by you, but by the customer who you thrilled. They tell their friends, and the trust level goes up at a factor of a thousand. Think about it: Who do you trust more? An advertisement, or a friend telling you how awesome something is?"

Reports of him "jokingly" asking for a Mercedes the following week are unconfirmed. And totally fabricated…just now.

6. Virgin Hotels steps it up

It was one thing when Virgin Hotels started rumours about themselves in anticipation of their new hotel in Chicago. It was quite another when they took those rumors to the doorsteps of their competitors.

While potential patrons eagerly await an opening date of Virgin Hotels Chicago, the company dropped off doormats — made in their signature red — in front of upscale Chicago hotels. They each had a different plug for their new property.

This may be a bit aggressive for some companies, but they are certainly getting attention.

7. Is there such a thing as a free lunch? 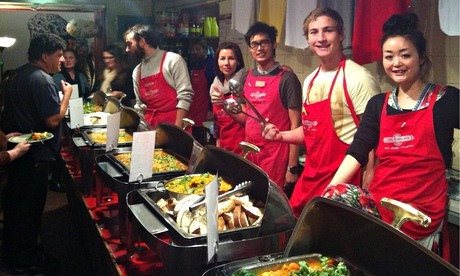 This isn't so much a marketing stunt as just a really good idea. Lentil as Anything, a not-for-profit chain of eateries in Australia, has added a Sydney location as their newest pay-as-you-feel restaurant.

The concept is simple and altruistic. Patrons aren't turned away based on an inability to pay. Rather, diners offer a gratuity after the meal based on what they feel it was worth or what they can afford to pay.

This unconventional chain is fairly well established in Melbourne, dating back to the 2000 opening in St. Kilda.

There are several similar venues in the United States and Europe. A few locations have options for diners to exchange labour for dining vouchers.