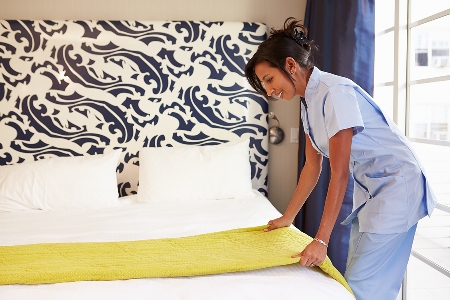 Fair Work inspectors discovered that ATM has been underpaying 45 housekeepers from its 65-strong workforce.

Housekeepers cleaning rooms at one of Australia's largest hotels will have their pay packets reviewed after an investigation by the Fair Work Ombudsman found they are being underpaid.

The housekeepers are mostly young Asian workers in Australia as international students or backpackers on the 417 working holiday visa.

They work at the Four Points by Sheraton on Sydney's Darling Harbour, part of the Starwood group.

Four Points by Sheraton does not directly employ the cleaners, instead contracting out its housekeeping services to a company called International Hotel Services.

The Fair Work Ombudsman began investigating ATM in August last year as part of a broader inquiry it is conducting into the wages and entitlements of cleaners at 4 and 5-star hotels throughout Australia.

Fair Work inspectors discovered that ATM has been underpaying 45 housekeepers from its 65-strong workforce.

They were underpaid their minimum hourly rates, casual loadings and correct penalty rates for weekend, public holiday and shift work.

ATM was also making unlawful deductions from the wages of some employees for misdemeanors such as misplacing their nametags – and unlawfully deducting two weeks' wages if six months of service was not completed.

The company should have been paying staff under the terms and conditions of the Cleaning Services Award 2010, but was incorrectly applying the Hospitality (General) Award 2010.

ATM sole director Cho Rok Jun and the company's general manager Micky An have struck an agreement with the Fair Work Ombudsman to review the pay packets of all employees dating back to June 1 last year – and then pro-actively back-pay all outstanding wages and entitlements and reimburse employees who had money deducted from their wages unlawfully.

They have co-operated fully with the Fair Work Ombudsman investigation and agreed to sign an Enforceable Undertaking (EU).

In addition to the back payment plan, the agreement requires ATM to:

The Cleaning Accountability Framework is a group of key stakeholders working together with the Fair Work Ombudsman to ensure compliance and best practice within the cleaning sector.

Fair Work Ombudsman Natalie James says the ATM matter should serve as a timely reminder to business operators of the need to understand and comply with workplace laws applicable to their workplace.

She says it also highlights the importance of companies who contract out services on their properties to fully understand the supply chain.

"In this case, the cleaners are not directly employed by the hotel, but it now faces potential adverse media as a result of not monitoring the employment conditions of all workers on its premises," James said.

"Procurement managers must be mindful that any savings they make when outsourcing cannot come at the expense of sub-contractors underpaying the minimum wages and entitlements of their employees – in this case, young, vulnerable workers who would have had little understanding of their workplace rights."

Enforceable Undertakings were introduced by legislation in 2009 and the Fair Work Ombudsman has been using them to achieve strong outcomes against companies that breach workplace laws without the need for civil court proceedings.